The spices of Pinus, the most widespread genus of the Pinaceae family in the northern hemisphere, often have sparse understory vegetation. However, sunlight intensity on the pine forest floor is sufficient for undergrowth. Allelopathy, therefore, is considered to be involved in the formation of sparse understory vegetation. The evidence for the allelopathy of several pine species has accumulated in the literature over the decades. Extracts of pine needle- like leaves, roots, litter, and soil under pine trees suppressed several plant species, including undergrowth plant species of pine forests. A substantial number of secondary metabolites such as terpenoids, phenolics, cinnamic acids, carboxylic acids, fatty acids, and flavonoids have been identified in pine needles and roots, litter and soil under pine trees. The evidence also suggests that some of these compounds are probably released into the soil through the decomposition of the plant litter, and into the surrounding environment as volatiles. The most active compounds found in the pine soil were methyl 15-hydroxy-7-oxodehydroabietate and 7-oxodehydroabietic acid; both compounds may also be formed through the degradation of resin acids, which were found abundantly in pine trees. Bioactive compounds released into the soil and surrounding environment possibly act as allelochemicals and suppress the invasion of undergrowth plants into the forests, resulting in the establishment of the sparse understory vegetation. The paper summarized the allelopathic activity of 16 Pinus species and 38 allelochamicals. 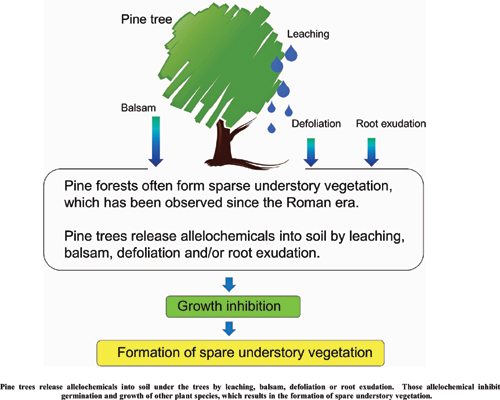