As one of the most important building blocks in organic synthesis, isocyanides come in for a wide range of transformations owing mostly to their unusual terminal carbon center adsorbed electrophiles, reacted with nucleophiles, get involved in radical reactions and coordinated with metal centers. The distinctive feature of isocyanide is its ready willingness to participate in multicomponent reactions (MCRs). MCRs represent a great tool in organic synthesis for the construction of new lead structures in a single procedure introducing both structural diversity and molecular complexity in only one step. Isocyanide-based multicomponent reactions (IMCRs) have become a powerful approach for the synthesis of complex molecules providing high degree of atom and bond economy under very mild reaction conditions. The use of enantiomerically pure isocyanides can, in principle, bring about two advantages: (i) the possibility to obtain a stereochemically diverse adduct, controlling the absolute configuration of the starting isocyanide; and (ii) the possibility to induce diastereoselection in the multicomponent reaction. The most commonly-used IMCRs are the Ugi and Passerini reactions. Many published reviews have focused on the Ugi and Passerini reactions from different viewpoints, but this review describes advances in the application of chiral isocyanides in MCRs. The rationale for applying such diversity generating chemistries is also discussed. 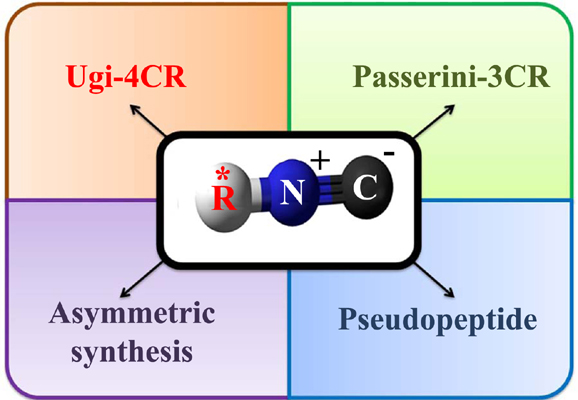