The use of nerve agents as warfare and in terrorist acts has drawn much attention from the governments and societies. Such toxic organophosphorus compounds are listed in Chemical Weapons Convention as Schedule 1 chemicals. The discussion about the chemical identity of the elusive Novichok agents, more potent compounds than best known G- and V-Agents, which have been implicated in recent rumorous assassination plots, clearly demonstrating the importance of the matter. Furthermore, accidents with pesticides or misuse thereof have been a pressing issue in many countries. In this context, the continued development of novel cholinesterase reactivators, antidotes for organophosphorus poisoning, a rather restricted class of pharmaceutical substances, is warranted. Testing of novel candidates may require use of actual nerve agents. Nonetheless, only a few laboratories comply with the requirements for storing, possession and manipulation of such toxic chemicals. To overcome such limitations, nerve agents’ surrogates may be a useful alternative, as they undergo the same reaction with cholinesterases, yielding similar adducts, allowing assays with novel antidote candidates, among other applications. 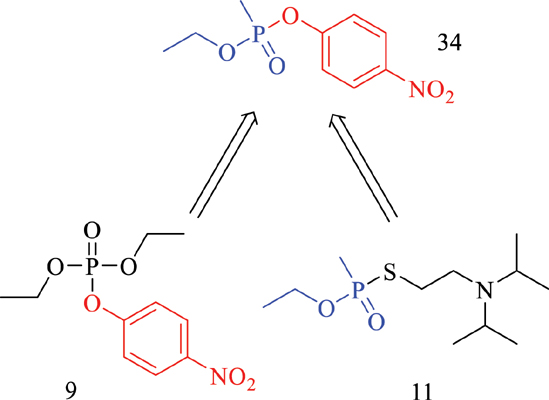